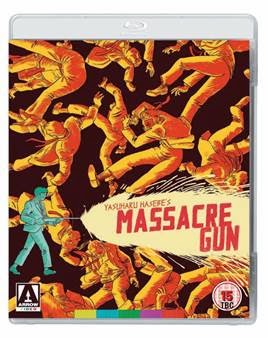 
Similar to the classic Japanese gangster flick Branded to Kill (released by Arrow Video UK last year),  Massacre Gun finds the story more explicitly grounded within the world of warring yakuza factions, as opposed to the world of fugitive hitmen, yet it is still very much stylistically of a piece with Branded to Kill. The most obvious connection being the presence of the iconic Shishido in the lead, an actor often characterized as “the face of Suzuki”.

The two films also both feature art direction from Suzuki’s regular collaborator Takeo Kimura, the startling compositions of cameraman Kazue Nagatsuka and a sultry lounge jazz soundtrack from Naozumi Yamamoto with songs by Ken Sanders (also seen in the Stray Cat Rock series). More crucially, however, is the fact that Massacre Gun-director Yasuharu Hasebe had begun his career as an assistant to Suzuki.

This new release will feature a restored high definition transfer and newly translated English subtitles, alongside a brand new interview with star Jô Shishido and an extensive interview with renowned critic and historian Tony Rayns on the Nikkatsu studio’s history.

Rounding off the Blu-ray is the original theatrical trailer, a gallery featuring rare promotional images, a reversible sleeve featuring original and newly commissioned artwork by Ian MacEwan and a collector’s booklet featuring new writing on the film by Japanese cinema expert Jasper Sharp, illustrated with original archive stills and posters.

Shishido stars as Kuroda, a mob hitman who turns on his employers after being forced to execute his lover. Joining forces with his similarly wronged brothers, hot-headed Eiji (Tatsuya Fuji, In the Realm of the Senses) and aspiring boxer Saburô (Jirô Okazaki, Stray Cat Rock: Sex Hunter), the trio escalate their mob retaliation to all-out turf war where no one will stop until one faction emerges victorious.

Strikingly violent for the period and gorgeously photographed in monochrome like genre siblings Branded to Kill and A Colt is My Passport (Shishido’s other films from 1967), Massacre Gun is a bold iteration on the genre featuring some stunning compositions and the assured direction of Hasebe.