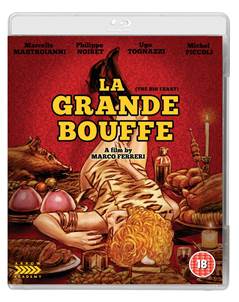 The most famous film by Marco Ferreri (Dillinger is Dead), La Grande Bouffe was reviled on release for its perversity, decadence and attack on the bourgeoisie yet won the prestigious FIPRESCI prize after its controversial screening at the Cannes Film Festival.

Released for the first time in the UK on Blu-ray, this stunning new edition comes loaded with a host of new extra features and comes packaged with newly commissioned artwork by Gilles Vranckx.