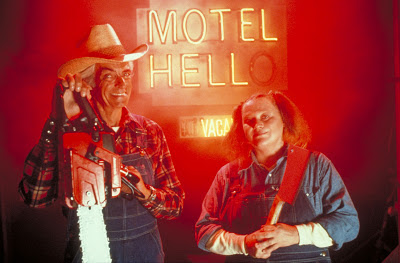 Given the ample evidence, there’s no doubt that the horror genre has a fondness for death by household tool. But it’s undoubtedly old Leatherface’s power tool of choice for which pride of place is reserved. What is it about the chainsaw that works so well on-screen? Perhaps it’s the roar of the engine as it fires up for the attack; or is it the incessant buzz of the chainsaw’s motor as the madman closes in on his intended victim? Perhaps it’s that combination of crudeness and modernity which the chainsaw represents – a sword for the industrial age, if you will. Whatever the reason, it’s clear that the saw is well and truly family to us horror fans – thanks, in no small part, to its immortalisation in Tobe Hooper’s The Texas Chain Saw Masscare (1974) and its many sequels, remakes and reboots. 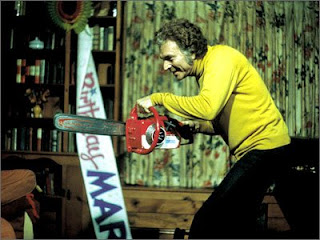 Whilst the chainsaw received its ultimate boost with Hooper’s seminal movie, it had already been used to great effect two year’s previously in the debut feature of a certain young upstart by the name of Wes Craven. The Last House on the Left caused shockwaves upon its 1972 release for a number of reasons, not least for its brutally realistic depiction of the rape, torture and murder of a pair of young women at the hands of a degenerate band of crooks. But Craven’s feature is also notable as one of the first, if not the first, horror movie to capitalise on the potential of the chainsaw as an instrument of terror. In the closing reels of Last House on the Left, the father of one of the murdered girls exacts a bloody revenge on chief bad guy Krug, grabbing a chainsaw and sawing the screaming man’s head off. Assuredly a high point in the annals of chainsaw cinema! 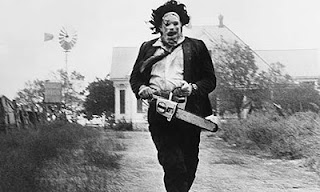 Of course, it was The Texas Chain Saw Massacre which really brought this power tool to the forefront of the horror genre. No matter that the movie only features one actual onscreen murder by chainsaw – the use of the word “chainsaw” in the title was pretty much enough to sell the film by itself. Indeed, Tobe Hooper has inferred that one of the main inspirations behind his 1974 movie was purely the image of a chainsaw. The director has stated on several occasions that, whilst looking at a chainsaw in a hardware store, it suddenly occurred to him that he could use it to cut his way through the busy crowd of shoppers. With that in mind, it perhaps a good job he channeled his energy into filmmaking!

Such was the impact of The Texas Chain Saw Massacre that the slew of sequels which followed was inevitable. However, due to legal wrangling, it wasn’t until 1986 when the buzz came back in Hooper’s follow-up The Texas Chainsaw Massacre 2. In the meantime, the mantle of chainsaw champion was picked up by another backwoods fable – 1980’s Motel Hell. Motel Hell, directed by Englishman Kevin Connor, stars TV veteran Rory Calhoun and Nancy Parsons as a pair of enthusiastic farmers who run a motel as a sideline. Farmer Vincent (Calhoun) is noted throughout the county for his famed smoked meats, for which customers travel from far and wide. But what makes his meat so darned tasty? Thus being a fright flick, you don’t have to rack your brains too hard for the answer. Especially when the guests at the ‘Motel Hello’ are disappearing at an alarming rate… 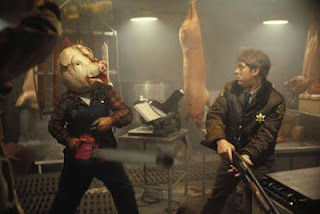 Alongside the Texas Chainsaw franchise, Motel Hell is one horror movie which truly knows how to exploit the potential of the chainsaw. Much of the promo material, for example, features Farmer Vincent wearing a pig’s head and brandishing his trusty tool at the camera – truly an iconic genre image if ever there was one. And if the chainsaw is a modernised version of the almighty sword, then Motel Hell takes this notion to its logical conclusion – by featuring an all-out chainsaw duel! Let us not forget that this was a whole six years before Dennis Hopper faced Leatherface for a saw-on-saw battle in The Texas Chainsaw Massacre 2.

Throughout the 1980s, horror cinema continued its fascination with everyone’s favorite power tool – most notably, of course, in the form of Leatherface’s second outing. But many other movies throughout this period sought to harness the potential profit power of the chainsaw. Pieces, that does-what-it-says-on-the-tin drive-in romp of 1982, for example, helpfully reminded us all via its poster tagline that “You don’t have to go to Texas for a chainsaw massacre!”. And quite right too – why should Texans have all the fun? Coming on in the decade, Hollywood Chainsaw Hookers (1988) made one of the more obvious attempts to cash in on the success of Hooper’s movie – by pilfering Leatherface himself, Gunnar Hansen, to play chainsaw-worshipping cult leader “The Master”. 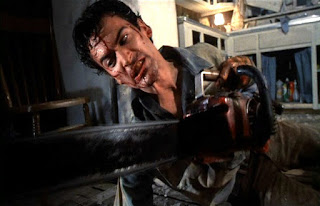 Perhaps the most satisfying chainsaw-related sequence in the entire ‘80s horror cinema cannon came in Evil Dead 2 (1987), Sam Raimi’s follow up to his splatteriffic 1981 original Evil Dead. In a moment sure to please even the most jaded of horror fans, the terrorised hero Ash (Bruce Campbell) saws his own possessed hand off – laughing hysterically at the camera as blood splatters his face. Unfortunately, Ash’s troubles with his now disembodied hand don’t end there – proving that even amputation isn’t enough to keep a good Kandarian demon down.

Bruce Campbell’s demon-related vicissitudes continued unabated in the 1992 Evil Dead threequel Army of Darkness, which sees Ash’s stump of an arm reunited with his chainsaw in spectacular fashion – another defining moment in the history of chainsaw cinema. Meanwhile, Leatherface and his portable mechanical saw (phew, thanks Wikipedia!) had already staged a comeback in the new decade, this time with his own name in lights, in Leatherface: The Texas Chainsaw Massacre 3. Unfortunately, despite the star power lent to it posthumously by Matthew McConaughey and Renee Zellweger, the fourth instalment, entitled Texas Chainsaw Massacre: The Next Generation (aka The Return of the Texas Chainsaw Massacre), proved a flop and ensured that Leatherface’s chainsaw would fall silent for several years thereafter. 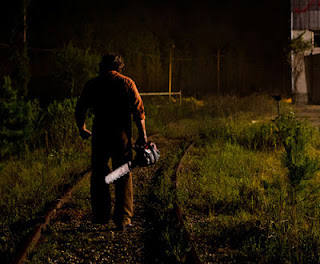 This brings us bang up to the present day. Well, sort of. It would seem that the good old chainsaw is well and truly back in vogue these days and the Texas Chainsaw franchise itself, which found a new lease of life in the 2003 reboot, is alive and well – accordingly, a  follow up to this year’s Texas Chainsaw 3D is reportedly already in the works. It’s funny how things seem to come back around again, time after time. As if to drive home this impression of history is repeating itself, the recent Evil Dead remake also threw in a pretty gnarly chainsaw amputation in its blood-spattered denouement, representing something of a grisly high in the seemingly never-ending story of chainsaw cinema. What can filmmakers do next with horror’s favourite power tool? Hard to say… but I have a feeling we haven’t heard the last of the buzz – not by a long chalk. Here’s hoping that the proposed Motel Hell, if it ever happens, matches the original for bonkers chainsaw-related antics. (Severed) fingers crossed!

Motel Hell receives its Blu-ray world premiere on 20th May courtesy of Arrow Video and is available to pre-order right here. Arrow fans can expect more chainsaw-related goodness later in the year - keep your eyes peeled for updates! 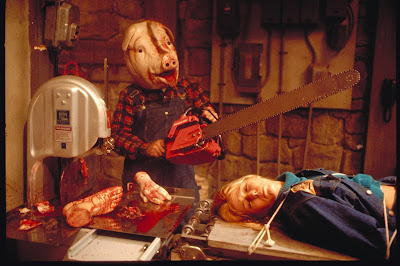