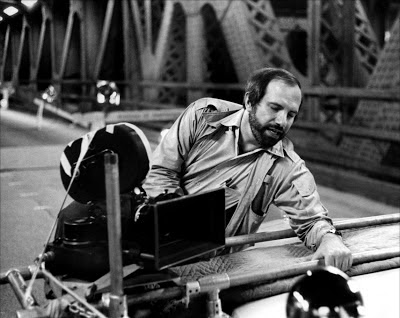 Do you like De Palma? Great, because we do too! So to commemorate our imminent release of the director’s superlative John Travolta-starring Blow Out, we decided to ask our nearest and dearest Arrow affiliates to list their Top 10 favourite De Palma flicks. Much like the work of the man himself, the results were intriguingly diverse and there were more than a few surprises thrown in along the way.
Read on the find out how your favourite De Palma movie fared in our rundown – and don’t forget to let us know your own personal Top 10 in the comments below!

High melodrama, creeping insanity and barely contained delirium abound in Brian De Palma's Obsession - a dizzying tribute to the high tension thrillers of Alfred Hitchcock. Michael Courtland is a Southern gentleman who seems to have everything - A successful business, a beautiful wife and an adoring young daughter – until a botched kidnapping tears his world apart leaving him widowed, bereaved and bereft. Years later on a trip to Italy, he meets a woman with an uncanny resemblance to his late wife but all is not how it appears as a twisted conspiracy threatens to unhinge his mental shackles, sending him to the knife edge of madness…

Carrying with it a sensuous, dream-like quality throughout, De Palma’s masterful Dressed to Kill is essentially the director’s own take on the ‘giallo’ genre – the type of sexy Italian thriller which enjoyed a boom in the early- to mid-1970s. Where the giallo film excels is in their execution for stunning set-pieces, and Dressed to Kill delivers such moments in spades – perhaps, most notably, with the startling elevator murder scene. Proceedings are further enlivened by a lush score from De Palma regular Pino Donaggio.

The film for which Al Pacino is best known, alongside Francis Ford Coppola’s The Godfather trilogy, the Oliver Stone-scripted Scarface stands as one of the most graphically violent films in De Palma’s already highly controversial oeuvre. Despite the concerns over its brutal content, Scarface received acclaim from such respected film critics as the late Roger Ebert who, in reference to Pacino’s character Tony Montana, described the film as “a wonderful portrait of a real louse”. Scarface retains a place of privilege within pop culture to this day, having recently received a name-check in the Jay-Z/Kanye West-collaboration Illest Motherf*cker Alive.

"You can't believe everything you see,” asserts the tagline for 1984’s Body Double – another De Palma movie which, alongside Blow Out, features elements of a film-within-a-film. Craig Wasson (who has appeared in such horror fare as Schizoid, 1980, and A Nightmare on Elm Street 3: Dream Warriors, 1987) stars as a B-movie actor whose unhealthy voyeuristic tendencies lead to him bearing witness to a gruesome murder. Body Double stands as one of De Palma’s more mean-spirited flicks, and as such it’s perhaps no surprise that the movie is repeatedly referenced as the favourite film of the disturbed protagonist in the novel American Psycho.

A financial and critical hit upon release, The Untouchables has star-power by the bucket-loads in the forms of Kevin Costner, Robert De Niro and everyone’s favourite Bond, Sean Connery – here putting on an admirable, if slightly suspect Irish-American accent as Jimmy Malone, one of the few upstanding police officers in a Prohibition era police-force which is riddled with corruption. Amongst other highlights, director De Palma reworks the momentous “Odessa Steps” sequence from Sergei Eisenstein’s Battleship Potemkin to great effect.


Telekinesis was big business in 70s cinema, and Carrie – De Palma’s adaptation of Stephen King’s first published novel – surely stands as its finest filmic incarnation. Sissy Spacek (who had previously appeared in Terrence Malick's film Badlands, 1973) is by turns heart-breaking and terrifying as the titular character, a teenage misfit who’s weighed down by the nefarious influence of her domineering mother. De Palma captures the coming-of-age portion of the source novel perfectly – and, when the supernatural carnage kicks off in the film’s final act, the terror is given full-reign.

The director’s first thriller and his earliest film in our Top 10 De Palma flicks rundown, Sisters features an early performance by Margot Kidder several years before she appeared as Lois Lane in the Superman movies opposite Christopher Reeve. Featuring characteristic De Palma touches such as split-screen effects, the director’s scary and stylish Sisters underlines its influences with a score by frequent Hitchcock collaborator Bernard Herrmann.

De Palma’s film about film-making, Blow Out boasts a revelatory performance by John Travolta, cast here against type – the actor having previously appeared in teen fare such as Saturday Night Fever (1977) and Grease (1978). Casting aside the tight trousers and fancy footwork of those movies, Travolta plays Terry, a movie sound effects technician who inadvertently finds himself embroiled in a plot to assassinate a presidential candidate. One of De Palma’s most acclaimed movies, Blow Out also carries the seal of approval of Quentin Tarantino, who has cited it amongst his three all-time favourite movies.

And here it is – our Number One Brian De Palma movie! Taking its cue from French writer Gaston Leroux’s novel The Phantom of the Opera, De Palma’s one-of-a-kind opus Phantom of the Paradise fused comedy and horror in a big-screen musical a whole year before The Rocky Horror Picture Show reared its head. In a parallel to its literary namesake, Phantom of the Paradise centres on a crazed, disfigured musical genius who “haunts” the wings of the Paradise music hall. A box-office flop upon its initial release, this – surely De Palma’s most eccentric work – is now rightly recognised as a cult classic.

So there you have it folks! With thanks to all who voted along with the Arrow Video team. The voters were, in alphabetical order, Daniel Bird, Robin Bougie, Michael Brooke, David Cairns, Alan Jones, Marc Morris, Kim Newman, James Oliver, Francesco Simeoni, Brad Stevens, Calum Waddell