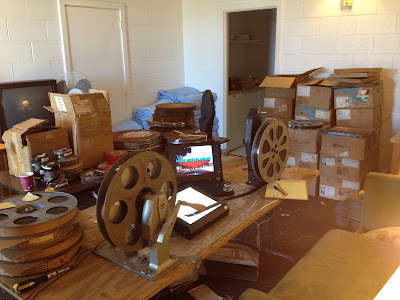 Sourcing the best possible material for a Blu-ray release can often be, by turns, an intensely frustrating and hugely rewarding experience. The Mutilator is no exception - suffice it so say that our search for materials for this title, a bona fide holy grail amongst horror fans, has covered the full gamut of emotions. Our search has taken us from the shores of North Carolina, to a succession of storage places across the US, and finally to the steps of the Library of Congress. But finally, we're happy to report that we have unearthed a FULLY UNCUT, virtually unplayed 35mm print!

"What's the big deal?" you ask. Well, die-hard fans of Buddy Cooper's classic slasher will no doubt  already be acquainted with the film's well-documented material issues, or rather lack thereof. When we first announced our release, we were proceeding on the assumption that we were going to have to cobble together the uncut version from a selection of Buddy's R-rated release prints (no uncut release prints could be located) and the off-cuts of the unrated footage. And yes, when I say "off-cuts", I mean the footage that was physically trimmed from the release prints at the behest of the MPAA. Whilst this material would have provided a serviceable master, it was far from the standard we would have hoped. Nevertheless, we decided to press on in the knowledge that fans - and I count myself among those - just wanted to see the film finally get its long-overdue release on  Blu-ray.

But then, after the frustration came the reward - word came to us that an uncut 35mm print indeed existed and was held at the Library of Congress. Better yet, it was virtually unplayed, being as it was the copy that the filmmakers had deposited for copyright purposes. Naturally, we resolved to get our hands on the print and, after some wrangling, the Library of Congress dutifully obliged. We're now overjoyed to say that we are eagerly beavering away on prepping our new master, confident in the knowledge that we are working with the best possible material we have been able to source.

Our release date has now had to be pushed back until 15th February to allow us time to complete the restoration work to our satisfaction. We hope fans understand and we thank them for their patience. After years of the film lingering in home video limbo, we're confident that this slight delay is warranted to ensure that the release is as good as it possibly can be. We don't settle for less than the best, and nor should you!

Stayed tuned for more updates on our release of The Mutilator in the coming weeks, but for now - By sword... By pick... By axe... Well, you know the rest... :)