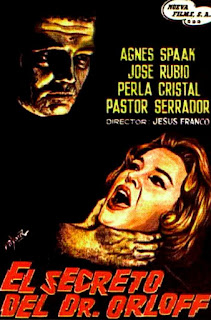 
Variously known as DR. JEKYLL's MISTRESSES, THE BRIDES OF DR. JEKYLL and THE SECRET OF DR. ORLOFF, DR. ORLOFF'S MONSTER is—despite its strip club sequences—a more traditional Gothic horror film than its predecessor in some ways. It would be the last of Franco's "museum pieces" as he subsequently embraced a more aggressively modern approach to genre filmmaking rooted in pulp fantasy, eroticism, and the Nouvelle Vague. Franco's interests can be seen edging in that direction throughout this film, which opens with an artful flashback sequence told entirely in stationary shots worthy of Chris Marker's LA JETÉE, and cuts away many times from its claustrophobic castle setting to sample the vitality of Holfen's nightclubs and strip joints—with Franco himself seen (once again, as he appeared in the original) tickling the ivories in a musical sequence. 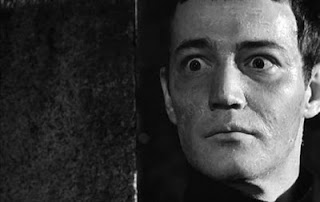 The villain in this sequel is neither Dr. Orloff (who at least is present) nor Dr. Jekyll (who is not), but Dr. Conrad Fisherman, played by Marcelo Arroita-Jáuregui, who would appear in numerous Franco films of the 1960s, including THE DIABOLICAL DR. Z and TWO UNDERCOVER ANGELS. The young ingenue is Agnes Spaak, the daughter of veteran screenwriter Charles Spaak (GRAND ILLUSION) and sister of Catherine Spaak (THE CAT O' NINE TAILS), who can be seen reading herself to sleep with a paperback study of Hènri-Georges Clouzot's films—just one of several nods to Franco's own cinematic heroes to be found in the movie. Melissa's relationship with her undead father—played by the Argentinian actor Hugo Blanco, who previously essayed the title role of Franco's THE SADISTIC BARON VON KLAUS—is surprisingly tender, and Franco's script presents Blanco with opportunities to strike profound emotional and existential chords not even attempted by Boris Karloff's performances as the Frankenstein Monster in the 1930s. 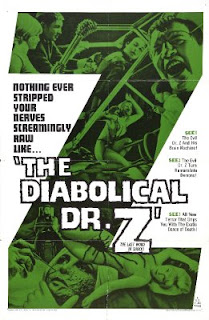 Elsewhere, Franco continued to work with his original Orloff, Howard Vernon throughout the 1960s, though—surprisingly—not in new Dr. Orloff scenarios. Instead, Vernon played Dr. Vicas in MISS MUERTE (THE DIABOLICAL DR. Z, 1966), Captain Hunter in RESIDENCIA PARA ESPIAS (HOTEL OF SPIES, 1967, again opposite Eddie Constantine) and, opposite Janine Reynaud, Admiral Kapp in a surreal sequence of Franco's international success NECRONOMICON (SUCCUBUS, 1968). Swept along by the momentum of the swinging Sixties and disinclined to return to "museum pieces," Franco and Vernon avoided taking commercial advantage of a product name that was evidently still quite vital but continued to work together for more than a quarter of a century. Though the circumstances were sometimes less than dignified—as in ROBINSON AND HIS WILD SLAVES (1971), where Vernon was recruited to play an island chieftan in an Afro wig and a grass skirt!—the actor trusted and admired his friend's boundless creativity.


Franco would revisit to the Dr. Orloff character in several of his later films....