Horror in the Heartland - The 'Deranged' Legacy of Ed Gein 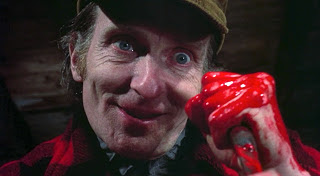 With our Blu-ray of 1974 classic Deranged unleashed this week, we thought we'd take a closer look at the shadowy real-life figure which inspired the film - "Plainfield Ghoul" Ed Gein.

For those not in the know, Deranged is a loose retelling of the Ed Gein story, which also served as the inspiration behind the horror classics Psycho and The Texas Chain Saw Massacre. Our friends over at Rue Morgue magazine (who've graciously contributed an article to booklet accompanying our release of Deranged) here present a whistle-stop tour through the legacy of Gein: murderer, grave robber, pop icon.

Where does Ed Gein come from? Yes, we know there was a mentally damaged Wisconsin farmer named Ed Gein who committed murder and horrible indignities to corpses both fresh and graveyard-green, but what about the mythological Ed Gein also known as “The Mad Butcher” and the Plainfield Ghoul?” The Ed Gein that has become a pop culture icon? Where does that larger-than-life Ed Gein come from?

He’s cut from the same cloth (or maybe same skin...) as zeitgeist murderers Charles Manson, David Berkowitz and Richard Ramirez. Former commune-living hippie Manson is a symbol for the death of the ’60s and the Peace and Love Generation; Berkowitz  embodies a dirty, depraved 1970s New York City; and Ramirez is often placed within the context of the Satanic Panic of the 1980s due to the occult symbols he carved on some of his victims. But Gein – who was proven to have killed two people and therefore doesn’t fit the technical definition of a serial killer (three or more is required) – had a much bigger impact than those serial killers on the American psyche.


It certainly wasn’t because he was the only pre-meditated murderer in 1950s America. During that decade, Harvey Glatman, a.k.a. The Lonely Hearts Killer, killed three to four women (exact number not proven), whom he lured back to his New York apartment, where he’d tie them up and rape them while taking pictures, then strangle them; and Leslie “Mad Dog” Irvin shot and killed a half-dozen people in Indiana. One killed to get his rocks off, the other robbed his victims; Gein, however, had much more complex and sympathetic reasons stemming from “mommy issues” that were perfectly in line with Freudian psychology, which was tremendously popular at the time.

More obviously, it was what he did to dead bodies that ignited the most morbid, primitive corners of the imagination. Shrinking heads, fashioning bones into tools and decorations and generally taking trophies is the stuff of pulp fiction about jungle tribes from “the Dark Continent” or the ghouls in EC comics – Gein was an avid consumer of both forms of literature.

In the popular mindset, this was the stuff of savages and monsters – “The Other” that civilized Americans had conquered. (Historically, it was the Indians who took scalps for trophies, not the white cowboys, after all...)  Prior to Gein, most Americans were familiar with shrunken heads and things made from human parts through either accounts in Ripley’s Believe It or Not or the death camp shrunken head paperweight and human skin lamp that were put on display during the Nuremberg Trials as evidence of Nazi atrocity during WWII. Only the Nazis would possess such hideous mementos. Right?

A few years ago I was given a tour of a private collection of bizarre and morbid curios, and among the items was the shrunken head of a Japanese soldier (along with his diary and identification), which has been made by tribesmen in the Solomon Island during WWII and given to an American soldier as a thank you for driving out the occupiers. Many of these trophies were smuggled back by U.S. servicemen, but, again, one could argue that these were relics made by islanders half a world away. Gein, however, could’ve stamped “Made in the U.S.A.” on the bottom of his ghoulish trinkets.


The real shocker was that these horrors came from the Heartland. One of the most famous American paintings, and the image that symbolizes the “American way of life” that the country had fought for, is Grant Wood’s 1930 oil painting American Gothic, which depicts the bald farmer holding the pitchfork, standing with a stern-faced woman in front of a white farmhouse. The white farmhouse with the gothic-style window (a church-like touch befitting the image’s puritanical, protestant overtones) in this image of pure Americana is a real house in the tiny berg of Eldon Iowa (population as of 2010: 927). Plainfield, Wisconsin (population as of 2010: 897) is only five-and-a-half hours away. This is wholesome farm country – the last place you’d expect to find a charnel house.

And there was Ed Gein, a Lutheran farmer in an Elmer Fudd hat, building a chamber of horrors in his quaint white farmhouse that looked like it could be any farmhouse. It’s no coincidence that the quaint white Farmhouse of Horror is also an integral part of The Texas Chain Saw Massacre – Tobe Hooper’s knowing parody of pastoral rural living. When Gein’s crimes were revealed, and covered extensively in the media at the time, his story revealed the fallacy of the American Dream depicted in T.V. families, aggressive consumerism and conservative politics and religion. As Hitchcock revealed in 1960’s Psycho, the boy next door-type living in the country could be a cross-dressing murderer living with his dead mother.

Ed Gein was an abscess in the Heartland of America, and as pop-culture’s continued fascination with him proves, it never healed. 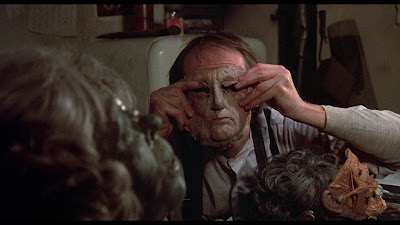