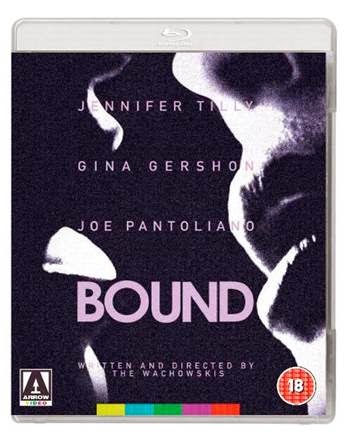 Arrow Video is thrilled to announce the UK Blu-ray and DVD release of Bound, the mid-90s neo-noir which marked the debut directorial feature from the Wachowski siblings (Lana, formally Larry, and her younger brother Andy). The movie will make its uncut UK Blu-ray debut on 28th July 2014 in a newly restored transfer with a host of brand-new extra features.


Opening in late ’96 in the USA and early ’97 in the UK, Bound, if anything, looks even more striking today than it did on first release. On its initial opening, it was far from being the only inventive low-budget crime flick doing the rounds. While once upon a time, independent films prided themselves on eccentricity and integrity, the game-changing success of Pulp Fiction created a run on loquacious crooks, ironic violence and plans going awry and, predictably enough, Bound was lumped in with this cycle.

The passage of time reveals just how unfair this was. With hindsight, it’s clear that the Wachowskis were drawing on a very real appreciation of genre, in particular the crime fictions of the 40s and 50s, an era of hardboiled novels and film noir, and this strongly influenced how they steered the film. For example, Joe Pantoliano was advised by his directors to base his performance as Ceasar on Humphrey Bogart’s character in The Treasure of the Sierra Madre and it’s not hard to see why: just like Ceasar, Fred C. Dobbs is driven to ever more extreme lengths by the lure of money.

The film’s visuals discreetly look back to an earlier age too; Violet plainly takes her fashion tips from the femme fatales of yesteryear. Elsewhere, the cool lines and classical styling of the apartment give it a non-specific period quality. Indeed, aside from some now obsolete technology – square televisions! mobile phones with aerials! – and some mid-90s barbering, there’s remarkably little to date Bound.

Of course, the echoes of older crime films are most obviously felt in the script: the basic set-up (lower-class worker hooks up with a dame who has an inconvenient partner) is very clearly a riff on The Postman Always Rings Twice. But, of course, in every previous iteration of The Postman Always Rings Twice, that lower-class worker had been a man. What made Bound so distinctive was that it was all about women. More specifically, it was all about lesbians...

Bound is far more subversive than the boys’ night out it could so easily have been, a film that plays around with conventions of both gender and genre, putting two women at the heart of a crime picture and letting them succeed on their own terms.

Although the sexual politics are the most immediately distinctive aspect of the film, the sheer skill with which the Wachowskis realised their vision is noteworthy. This was their first time at the bat and, if nothing else, Bound is a tremendously assured debut.

Arrow Video’s newly-restored presentation of the feature, transferred from original film elements, comes with a bumper crop of special features, including all new interviews, with stars Gina Gershon, Jennifer Tilly and Joe Pantoliano

The disc will also include the new feature Modern Noir: The Sights & Sounds of Bound in which director of photography Bill Pope, editor Zach Staenberg, and composer Don Davis discuss their experiences on creating the look and sounds of the film.

Alongside this, the Blu-ray disc will also feature the original theatrical trailer, a reversible sleeve featuring original and newly commissioned artwork by Sam Smith and a sizable collector’s booklet featuring new writing on the film by noted critic James Oliver

Before making their name with worldwide smash hit The Matrix and its two sequels (which they similarly wrote and directed), sibling duo The Wachowskis debuted with this sizzling neo-noir thriller financed by legendary Italian producer Dino De Laurentiis.

Gina Gershon (Showgirls, Face/Off) plays Corky, a young woman recently released from a five-year jail term for, as she puts it, the “redistribution of wealth”. After a brief lift encounter with her sexy and sultry neighbour Violet (Jennifer Tilly) the pair strike up a steamy love affair under the nose of Violet’s unhinged Mafia boyfriend Ceasar (Joe Pantoliano). Soon the two women are hatching a plot to steal $2 million from Ceasar and his associates – but if you’re going to mess with the mob, you’d better be sure you do it right…

Hugely well received upon its release, reviews for Bound saw some critics comparing the Wachowskis with the Coen Brothers – and Blood Simple in particular – whilst Roger Ebert heaped praise on the film, declaring it to be “one of those movies that works you up, wrings you out and leaves you gasping”. By turns shocking and funny (and with plenty of lesbian sex scenes thrown in for good measure) Bound is an astoundingly assured debut which oozes style and sensuality.