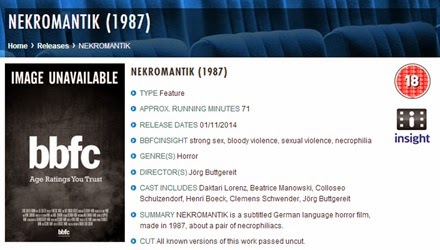 Shocked. Astounded. Flabbergasted. These are all words that could be used to describe your reaction when we announced last week that we would be bringing Jörg Buttgereit's grimy 1987 underground classic Nekromantik to UK home video for the very first time later this year - fully uncut. Many were asking, "How on Earth did you get it past the BBFC?!" Others simply declared: "You'll never get this past the BBFC uncut!"


Well, ye of little faith, this morning we officially accepted the '18' category for Nekromantik and the title is now searchable on the BBFC website: http://www.bbfc.co.uk/releases/nekromantik-1987. Go ahead, take a look - as they say, seeing is believing!


Here follows some words of caution offered up by the BBFC regarding the film's contents:

"There are a number of scenes in which the principal characters have sex with heavily decayed corpses. These scenes include simulated penetration and oral sex. There is also a scene in which a man ejaculates a mixture of blood and semen, although this is clearly and obviously fake.

"There are some scenes of strong bloody violence, including a man stabbing himself in the stomach repeatedly. There are also some scenes of sexual violence, including a prostitute being raped and strangled, and a scene in which a character watches a film in which a woman is being attacked.
"There is sight of a rabbit being slaughtered and skinned."
Sounds like a glowing recommendation to us! Stay tuned for more info on our release of Nekromantik - you know you want to...