To mark this milestone – our birthday falls on June 29th – we’re giving one lucky fan a chance to show off their Arrow Video knowledge and win a full set of our six Zavvi exclusive SteelBooks. That’s Day of the Dead, Black Sunday, Maniac Cop, City of the Living Dead, Inferno and Phenomena – and remember one of them may even include the Golden Ticket! Two lucky runners-up will win two Zavvi exclusive SteelBooks of their choice. 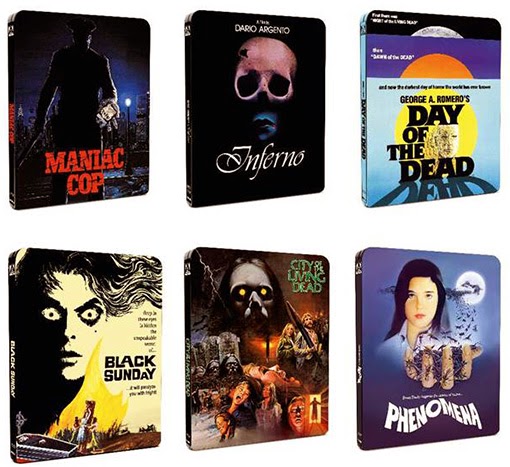 To be in with a chance of winning all you need do is answer correctly as many of the questions below as you can. Those with the highest score will be entered into a draw and selected at random.

Email your answers to competitions@arrowfilms.co.uk. The competition is open to entrants worldwide and ends at midnight on June 29th. We’ll be selecting the winners shortly afterwards. There will be a limit of one entry per person so make sure to double check your answers before sending! Best of luck!

02. Saxon, Mötley Crüe and Billy Idol all appear on the soundtrack to which Arrow Video title?

04. In which Arrow Video title will you find Ash, Shaft and a former world middleweight boxing champion?

05. The Italian title to which Arrow Video title translates as ‘The Three Faces of Fear’?

06. Which Arrow Video title had its original UK poster censored by a red ribbon?

07. Who are Randall, Fidgit, Strutter, Wally, Vermin and Og?

08. Which Arrow Video title first premiered on British network television as part of the BBC’s Forbidden season in 1997?

09. In which Arrow Video titles will you find the following characters?
a) Roderick and Madeline
b) Space Girl
c) Looney Tunes

10. “You can always tell somebody’s sense of humour by if they like this movie or not” is a line from the commentary to which Arrow Video title?

11. Which Arrow Video title was initially released onto home video as a talking VHS box?

13. Which Arrow Video title was initially given one minute and 46 seconds worth of cuts by the BBFC in 1980?

14. Bryan Singer, the director of X-Men and The Usual Suspects, earned his first credit on which Arrow Video title?

15. Who provides the connection between Cheeky and Dressed to Kill?

16. The Delta Force, The Last American Virgin, Black Sunday and The Wild Geese – which is the odd one out and why?